When I was a child, visiting my grandmother’s farm in Indiana, I found her old house fascinating. It had been built in the late 1880s, and there seemed to be nooks and crannies everywhere.

Upstairs, there was my grandpa Joe’s bedroom, which I never fully explored, even when he was out in the fields. The curtains were dark and red, shadows filling the corners. When I read Jane Eyre, I imagined his closet was the room in which poor insane Mrs. Rochester was confined. Maybe that’s why I never went in.

Polished wood floors set the stage for the formal parlor with velvet chairs, the room that was never used except for taking official photos of the family. The basement was dark and spooky, vaguely hitched to the memory of tornadoes for me. We must have hidden there a few times. My mother told the story of a tornado passing right through when she was safe, down the angling road at the school house. When she walked home, my grandmother’s curtains were in the road, blown there by the wind.

But the most cunning place in the whole house was the little closet under the stairs. No budding wizard lived there, unfortunately–just a tiny rack for coats, and a hard chair next to a small table where one could find 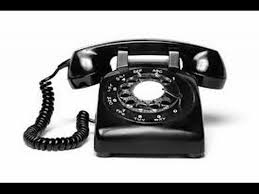 Most people had to bend down to get inside, since the upward climbing stairs were above the space. Games and other things filled the angling back of the closet, but that telephone was a lifeline back in Bunker Hill, both for my grandmother and for the lives of others that she touched.

When we lived across the road in the 1960s, the phone was on a party line. You had to wait your turn to make a call–but oh, the things you heard, if you were rude enough to listen in. My grandmother would have been shocked and horrified to even consider such a thing. I doubt her neighbors were always as courteous.

She used the telephone to connect with others. As a farm wife, she didn’t always get out of the house into the community, especially in her younger years. There were people to feed, and chores to do. She called to set up her precious 7:30 Club, where ladies of the community would meet monthly in each others’ homes to visit and play cards.

The phone calls I remember most, though, were those on weekend afternoons, when she went in and left the door barely cracked open. She volunteered for the Red Cross

, and her job was to relay calls from soldiers to homes, and from homes to soldiers. I sat outside the door and listened to the stories, bad news often, but sometimes good things like the birth of a child. That tiny closet became a microcosm of the world, gathering all the feelings and sympathy passed on from one caller to the next, bringing the news that really mattered to those who needed it most.

Why was this mission so close to her heart? I suspect it was because of her brothers,

my great uncle Cmdr. Jim Moore, (left) who was a Navy veteran aboard the USS Antares at Pearl Harbor on Dec. 7, 1941, and Capt. Paul Moore, who was a POW of the Japanese. She, of all people, in a pre-social media time, would know how important it was to have any information about loved ones far away from home, serving our country.

I’m proud of her work. As much as she had to do to run a huge farm, she found time weekly to improve the lives of others.

What sorts of volunteer work makes you happy?