It would be difficult to find a bigger event in our county than the annual fair. It’s said to be the largest agricultural fair in the state. it sure feels like it on my broken knees at the end of walking around it all afternoon, that’s for sure!

I was originally not going so early in the week the events will be going on, but I made the mistake of discovering that a live wrestling event was going on. Not the  WWE, mind you, but a smaller, local version thereof. Little Miss has become a huge fan of WWE. for some reason, and I missed a chance to take her to an event last year. So I bucked up my courage and muscle relaxers and we headed out to the fair grounds.

She picked seats that had a great view,  away from the main crowd, and the bulk of the noise. I was also tickled that she managed to go to the  busy souvenir table, and negotiate her own signed photo of a wrestler, 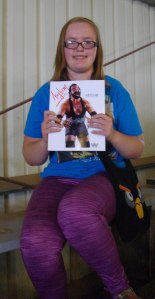 with her own money, despite a barn full of sensory distractions.

The matches were hot and heavy, and she got to see Asylum, her

My favorite was the last fight we watched….hard to tell who the “bad guy” was. The fight was allegedly for some Pennsylvania championship, and the current champ,

“Big Time” Bill Collier, sure had a big shiny belt on. But he was fighting this little skinny guy in tie-dyed yoga pants, who

went by the name Jimi the Flying Hippie. How could I not cheer for Jimi?

The crowd was funny, too, because Big Time came out as a bad guy….but sure as shooting, the politics in this backwoods haven of conservatives took over and the poor pinko hippie

had no chance at all.

Once she’d had her fill of the entertainment this provided, we walked the fair grounds until I couldn’t stand it any more. We checked out the Home Show buildings, where she got comic books from the CCDAEC  that convinced her that I needed to stop drinking my once monthly wine coolers because I am clearly an alcoholic. *eye roll*

Of course we stopped by the Methodist Church building to have homemade pie! She tried strawberry rhubarb on purpose because it was something new. 🙂

And no Nick! Serious disappointment there.

Lastly, it was annoying as hell that the carousel they got this year was for little kids only, and they wouldn’t let her ride. She was nearly in tears, but stopped just short. It’s been her go-to ride, guaranteed at least five times a fair. She needs the spinny thing to help with her fair sensory overload. They didn’t even have bench seats, like most do, for the older people to relive a bit of their youth with a ride. Considering they charge admission including rides for everyone this year, you’d think everyone should have access to the rides. End rant.

So we went on the ferris wheel instead, and she pronounced herself 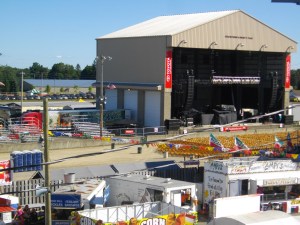 satisfied, and reluctantly declared it her new favorite. From there we could see them setting up  hundreds of seats in addition to the grandstand for the Jake Owen concert. We left just before that onslaught of folks began to arrive. Yay!

Now for a night of trying my new magnesium oil spray and letting Little Miss de-stress. She had an amazing day, and I couldn’t be happier.

One thing we learn about kids on the spectrum is that they tend to think about things in a very black/white manner. What they see in front of them is what is; if it’s not there, then they don’t imagine it.

For years, Little Miss was this way, and it was a constant point of “push” on my part. Why did someone act in a certain way? What would happen if…? That intuition part was just absent. I always got an irritated “I don’t know,” or more often, just ignored.

But this year, that door has cracked open, slowly at first, and then the possibilities have expanded–thanks to American game shows.

I have mostly considered game shows kind of a waste of time. After all, I wasn’t winning anything. Other than bragging rights to answering Jeopardy questions faster than the contestants (not necessarily a grand feat safe on one’s couch), there wasn’t much point. 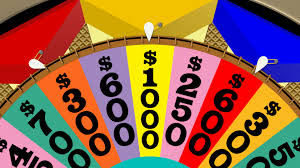 But then we discovered Wheel of Fortune. it was on one night and I noticed Little Miss picking out patterns. She could identify “the” from one letter. Or other combinations. So we started purposefully watching until she could use her intuition to guess the letters. Eureka! Something beyond black and white!

Simultaneously, her ability to explain other things not seen fleshed out as well. Why did that man on the commercial ask people to behave a certain way? What does that girl feel, just by reading her face? Continued progress.

So while other parents, I’m sure, are chasing their kids outside, I’m setting up game shows. We watch The Price is Right, to guesstimate 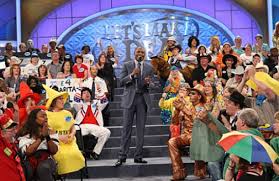 the prices and how much things might be worth. We watch Let’s Make a Deal to learn how to make decisions about things that can’t be seen. Should you trade a small box for a large box? Is bigger always better? Is money in the hand better than something you can’t see? She nearly always chooses the sure thing. Can’t argue with that.

This month, she’s kept her tablet handy, and every time there’s a trip to somewhere, she looks up where it is, identifies the flag and the location, and shares some facts with me about the country or city. If it’s a place she’s been, it brings recall of fun trips together. Otherwise, it’s a painless geography lesson.

Of course, she’s still focused on having all the “As Seen on TV” gadgets, or anything that’s marked “New”. We’re working on that. But watching how she’s developed this summer, thanks to these entertaining lessons, I think we’ll get there.

Now I just have to get her a passport so she can go to these islands in the Caribbean. She’s insistent….

Remember those corny writing assignments we always had to do at the beginning of school every year? Our local schools don’t start until the first week of September, but it sure feels like it’s coming down to the wire!

So what did we do this summer?

Little Miss has been content to spend quiet time in the apartment, alternating with periods of sitting in the grass outside communing with nature. Since my chronic pain/fibromyalgia has been in flare mode the past several months, that’s been fine

with me. However, she did go to her first sleepaway camp, and completed a week away from home very successfully! She didn’t try everything that was available, but did learn about archery and came home with a whole box of arts and crafts. So proud of her.

We also traveled south, as we usually do, making stops in Asheville and Pensacola. We’d hoped to be moving to Asheville this year, but a number of factors combined to put it off again.

Little Miss has a National Parks Passport that she likes getting stamped at important places, so we kept an eye open for these opportunities. We

found one on the way south at Friendship Hill, PA. where she learned about Albert Gallatin, a Secretary of the Treasury who bought one of the best real estate deals in American history–the Louisiana Purchase.

We also enjoyed the grounds of his beautiful home.

Asheville was a delight, as always We picked up the Z-Man (grandchild number 9) and took him along for a week of fun and sun in the Panhandle with the other cousins.

My Pensacola daughter, who’s a local teacher, took us to the Gulf Islands National Seashore, where we visited Fort Pickens.  (More on this in my next post!) 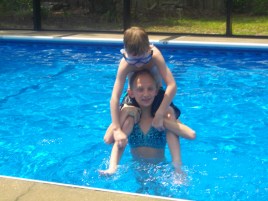 We also had plenty of down time to enjoy the backyard pool, with grandchildren #s 3,5,and 6. Because the girls were so busy with activities, I got to spend more time with Ethan, which was really nice. 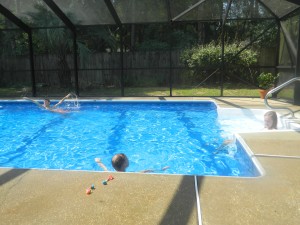 Tween boys can be standoffish and hard to talk to some times, but he was sweet and really helpful. Meg threw a birthday party for Emma, in the form of a carnival, with games and tickets to win, that was an amazing stretch of creativity and fun for all, despite the 90-d 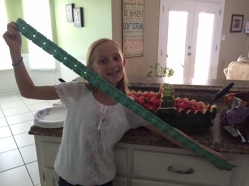 Emma also participated in a gymnastics demo, which was almost too much for my camera speed. For someone with such long legs, she’s 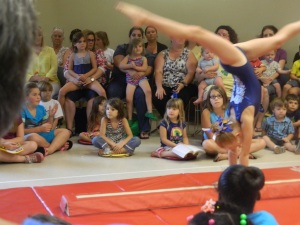 very flexible!  What a talented bunch of family I have!