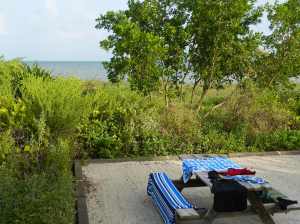 I’ll start with the view from our campsite at Curry Hammock State Park which was interesting in a number of ways, including how close we were to the beach, although pursuing the wildlife was much more fun. The park is “green”, so the restroom/shower facilities were all specially designed to fit with the local ecosystem.

The wildlife that popped up all around our campsite included some fabulous green iguanas like this guy: 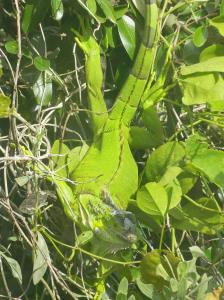 The area, though is known for its blue crabs, which had hideyholes in the ground all over the place, several around the campsite itself. My daughter had the chance for prolonged conversation with some in the mornings, since she is an early riser, but I didn’t get to see so many.

Out time in the Keys sadly came to an end, and we headed north, where M and kids rented a car to head home, while we stayed in Satellite Beach with a friend of mine from the old newspaper days. It was two days full of fun, great food and 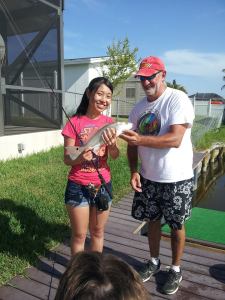 Linda’s friend Rob was so generous with his time–one afternoon, he took the girls to his neighbors’ dock. Here’s the result–they each caught one! 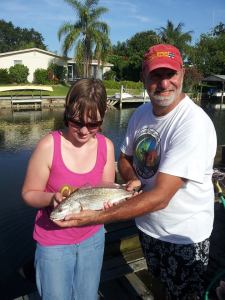 And yes, Mr. Redfish was delicious.

While we were there, we also had the chance to visit Kennedy Space Center. Yurie was excited to go there because of the rocketships and the history. Little Miss just went for one reason: 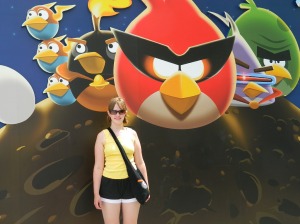 Yes. Angry Birds in Space. A whole building devoted to it, with a maze, and games, and the opportunity to sling birds at pictures of pigs. What says space travel more than that?

She actually did pay attention to several of the other exhibits (though she was still pretty obsessed with the Birds), as she demonstrated in later conversation. We took a bus ride out to see some of the outbuildings (including the one where Rob works!) and then came back to sit through a mock-up of a moon landing, which was cool (especially for those of us old enough to have watched it on live tv) . 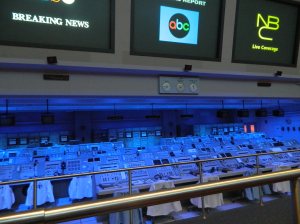 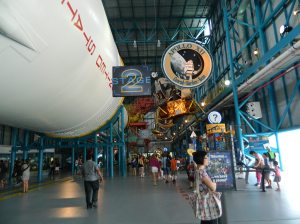 It was great reconnecting with Linda. We’ve both gone on to interesting lives, she as a counselor/teacher and me as an attorney/writer. But to take just a moment to relive those escapades as young writers–driving out onto the flight line at the air force base, checking out the drug hangouts in Florida City and nearly getting nabbed by the DEA–was awesome.

Then a sad day as we drove to Miami for Yurie to catch her plane home to Japan. We all survived the logistics of getting her to the airport during rush hour in Miami in a giant RV, AND of getting her multiple suitcases to the baggage carrier successfully (and the fact that the Miami Heat apparently won some sports event and we could have been marooned in city traffic for days, but we didn’t know it at the time). Goodbyes were tough. We’ll miss you, kid.  😦

The next leg of the trip was to Fort Pierce to visit another old friend of mine. We were both a little worse for wear for the years that had passed, and both dealing with chronic pain. But it didn’t stop my friend from being a delightful hostess, and we had a wonderful couple of days. Here she is with her friend going to a Mad Hatter party: 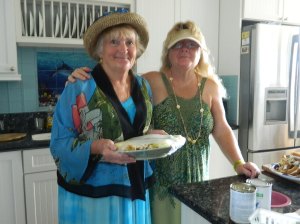 She looked great, and I’m so glad we stopped to see her. She lives in a beautiful condo overlooking the Atlantic Ocean, and invited me to come stay with her on a more permanent basis. Have to admit, I’m keeping that in the back of my mind. There are worse choices.

Little Miss was more delighted with the two miniature dogs living there: 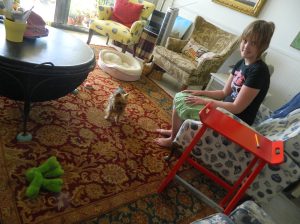 They were cute, but definitely fonder of her than of me or other visitors.

Finally, north to Asheville, to complete our travels, to visit with K and her lovely partner L. We always have a good time with them, and they work so hard at creating a life together with L’s son, even though the state of North Carolina is much less than helpful in its acceptance of gay rights. We took the chance to do nothing a lot of the time, preparing for the long drive home, and took advantage of the KOA’s nice facilities, pool, park, etc. to just let go. 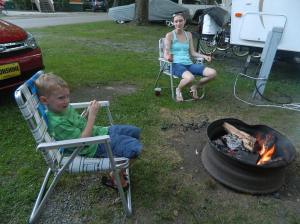 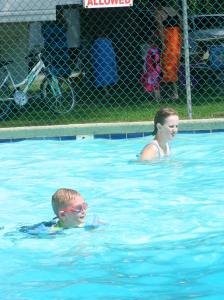 And of course we visited L’s new job–Asheville’s Ultimate Ice Cream shop. With unique flavors like goat cheese and bing cherry, chocolate and ginger, and even caramel with blue cheese (to DIE for…), it was an amazing tastefest. That was before we got the maple and bacon ice cream.

It was unbelievable. Please put it on your bucket list. Right now. I’ll wait while you get a pen.

Hard to believe all this fit into 16 days, but it had to come to an end eventually. What didn’t come to an end, of course, was the pile of work waiting for me when I got back. But then that’s what the real world is about. Time to start dreaming of next year’s vacation!