In the few short days between the time Little Miss’s school let out and summer school starts, I wanted to take her someplace, you know, just Mommy and me kind of thing. So we went to the Erie Zoo.

Compared to the Miami Metrozoo and even the Cleveland Zoo, Erie’s is pretty small. But it’s also intimate. Time after time, we came right up to the animals–the kangaroo exhibit is a walk-through where the kangaroos are all loose and hopping around where people are!

Little Miss got a chance to get close to her favorite, the giraffes: 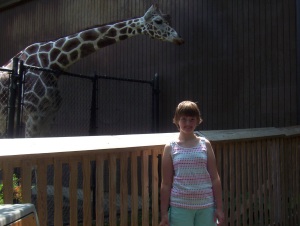 The zoo also has a fabulous carousel with exotic animals of all kinds. Little Miss, of course, chose… A warthog?? What? Instead of a dragon? A panda? A giraffe??? Oh well. At least she’s diverse.

She also enjoyed currying the goats; not the same as goat curry, which you should not mention at a petting zoo, I’m sure: 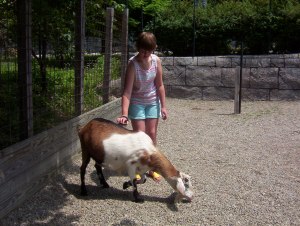 The next day, my daughter S came to Pittsburgh from her home in Tennessee, with her new man. They were headed for the races, but they took time to visit the Pittsburgh Zoo, as he is particularly fond of such things. They’ve been to zoos all over the eastern United States. But Pittsburgh has something really incredible in the PPG Aquarium at the zoo, (see the website for video) where you walk through a tank of sharks and other fish as well as get a chance to see the polar bears swim right over your head.

I hadn’t seen her for several years, as we were out West last year when they came here, and she looks wonderful, having lost a hundred pounds after surgery. She’s back in school and working hard as a single mother trying to improve herself. And I appreciate that she’s taking some time to relax and have fun as a grown-up as well. This is a hard balance for all of us to maintain. She seems to be getting it right.

Here’s all of us enjoying the fishies: 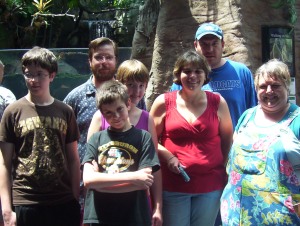 Now if we could only figure out why all the monkeys were so excited after we left their area…and where Dr. Doo-Be-Do has gotten to….  hmmm….

After dealing with the aftermath of several families’ dysfunction of late, I’ve noticed a certain pattern that shows that the old model is severely out of date. Sometimes when Dad is out doing what he feels is expected of him–providing for his family financially–Mom is just not living up to her side of the bargain.

And that’s not fair.

Take the example of a dad working twelve hour shifts a day driving a truck, picking up and dropping loads, even on the weekends, so he makes a steady income enough to pay all the bills in the household. What a man’s supposed to do, right? Or so the 1950s model would say.

But let’s remember the moms in that model–they were home, baking cookies, making sure the children had nutritious meals, cleaning the house, doing the laundry, running the errands, doing the grocery shopping. Taking good care of the children. The REST of the work.

That was the half they picked up as their part of the bargain. Dad, you work hard outside the home to bring home enough money so we can feed the children and keep them safe and warm; Mom, you put that money to work and devote yourself to carrying that task through.

But for a lot of stay at home mothers today, that’s just not how it works. While the fathers are at work, the moms are Facebooking all day.  How often does all that Farmville gardening feed your own kids, hmm? (At least the cases I’ve seen haven’t gone as wrong as this Korean couple, whose real life baby starved to death while they raised a perfect one online.)

Or maybe the moms are drinking all day to escape the children, while the children get into God knows what. Or maybe they’re watching TV all day while the laundry piles up till no one can walk through the bedrooms, and dirty dishes are a mountain in the sink.

Is that really what a hard-working father wants to find when he comes home?

What about the real damage that might not come out for a decade or more? The child neglected by the mother living a “better” life online or texting or partying with friends all day, so that he learns, even at the age of one or two, that the only way he’s going to get lunch is if he scavenges through the refrigerator for a hot dog, or leftovers, maybe, if she’d even cooked dinner the day before.  When he learns that he should steal or hoard food, because he doesn’t know when he’ll eat again (even if he’s now lived in a home for over ten years when he always has food to eat). When he learns to shift and lie and hide to avoid punishment because he knows soon her attention is diverted back to her games. When he learns that nothing is the same day to day, so the “rules” change constantly and he doesn’t have to do what he was told yesterday because now it’s today. When he finds that only his current impulse governs what he does, because he’s not accountable to anyone.

When a father is working a second shift job in construction, a third shift job at a convenience store, and most days of the week, stopping for another few hours in the morning to make donuts to get just a little more money, is this really what he should have to deal with?

It doesn’t seem fair. But it’s too late to undo it now.

Dads who worry about what’s happening at home probably have a good reason to. Please take the time to talk about your bargain and make sure everyone understands what’s expected of them. Take action. Before it’s too late for your children.

It’s no use reminding yourself daily that you are mortal: it will be brought home to you soon enough.

And so it was, that as the spring days passed, the celebrities, too, began to pass like falling rain (many of them from mysterious brain hemorrhages, suddenly, which is a little creepy, but a subject for another day). Seems we’ve started to lose many of the folk who peopled the big and little screen in my era, which is always food for thoughts of mortality and the passing of time.

But add to that, the much closer reality of the recent deaths of two women I have been close to over the years in this community.

Judith was a delightful, warm woman who added Southern charm and wisdom to every contact we had.

Mary Lee was a spiritual guide of sorts for me, a replacement mother figure, and the person to whom my first book was dedicated, as she gave me “permission” to chase my dreams.

Both died after particularly debilitating diseases that I hadn’t known about, because in recent times we hadn’t had much contact.

But all these losses bring focus to the fact that time is passing, and we are all inevitably getting older and closer to those final moments.

Have I done everything I’ve intended for my life? Have I met some randomly set standard–and whose standard counts? What can I do to make whatever days I have left meaningful and important?

Certainly food for thought as I look toward the future.

Regular members of my readership club will note a drop-off in post frequency, and I apologize for that. I have been distracted by…dare I say it?

As if Little Miss and her PMS isn’t enough, we have been wrestling with the Captain’s behavior, which looks like it will now be handled by partial hospitalization over the summer, with strict attention to behavioral issues. Dr. Do-Be-Do has also begun exhibiting angry outbursts and lackadaisical behavior toward assignments and teachers that is very unlike him and somewhat frustrating; these, hopefully, will be the subject of work at his therapeutic camp for which I’ve finally completed the intake.

Add to this an overhaul of four rooms of our house, including a complete ceiling replacement in the 30 foot by 20 foot kitchen and the bathroom flooring, the decor switching from warm-colored Moroccan grotto to stark cream and cherrywood Victorian/steampunk. With a hint of Firefly, as we add some Chinese touches, including a fabulous Chinese cabinet I drove to Asheville to retrieve this weekend, with Little Miss as my co-pilot.

My secretary has essentially vanished into her other job; I’ve seriously got to consider replacing her, but the thought process has been too painful. I’ve muddled through on my own, and the Cabana Boy, bless him, has put me on the volunteer list to take interns from his business school, at least to tide me over.

My passion has found me five editors in the last thirty days who have requested to see full manuscripts of mine, and are reviewing them as we speak.

My checkbook, however, is reminding me that somewhere along the line, all of these things are extraneous to the business of paying for our lives. So the stack of bills here must be attended to.

With any luck, we’ll be back to passion soon. Stay tuned…